That’s the familiar phrase I kept thinking about when I participated in this year’s EpicTour with my wife Kate, my 4yr-old Chase, and 16 month-old Beth.

The idea was to ride the 80km category as a family riding e-bikes and pulling a trailer. I chose a Cube Hybrid Reaction eMtb with slicks while Kate rode a Specialized Vado. As we approached the start coral, we joined the group of riders consisting 100% of drop handlebar road riders. We made our way to the back of pack to respect the fact the bikes we were on totally differentiated us from the entire group. Not to mention, we were certainly the only people with a double trailer attached. 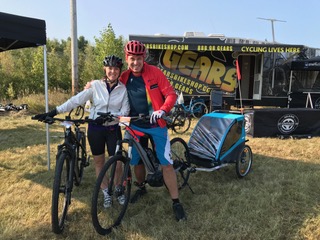 While applying sunscreen to my kids, one participant suggested we may be in the wrong category, and that the Family 20km bike ride start was later in the morning. I confidently assured him that we were aware, and that we had chosen the proper distance feeling confident we were okay. Unconvinced, he felt compelled to warn that the group behind will be starting very fast, and to be careful of their approach. Clearly, he was oblivious to the fact our bikes were e-enhanced and able to keep the follow group at bay.

After a few shout-outs to the sponsors the ride began. Within a kilometre we approached our first hill. As a family, we started passing riders as well as the participant who warned us, and who now looked at us baffled – he couldn’t understand how this could be possible. I gave a smile, and held back saying ‘Watch out, the group behind will be coming on strong’. We settled into our groove for the next 20km; on the uphills we would roll past riders and on the downhills the road bikes would roll past us. Riders seemed to dig in a little harder when they were around us, I think they were a bit perplexed and it was tricking their brains.

For the first time, Kate and I didn’t have to compromise our individual experiences. Pulling a trailer on an eBike is definitely arduous, and often times Kate would pedal lighter so I could keep up on the uphills. Cycling on these bikes equalized the experience so we could take in the scenery and chat rather than anticipate the upcoming terrain.

Interestingly and importantly, our family merged into the other riders without obstructing their experience. Kate has tested other e-bikes, but with the Vado she felt she was riding a ‘Cadillac’. The Vado’s Brose motor was completely silent while I could hear the Bosch motor of my ride.

I was playing around with the different levels of assist on my bike, but was very conscious of preserving battery power, not knowing if I would have enough juice to complete the 80km.

As one power-bar disappeared after 20km I felt a bit anxious. Kate’s monitor was still displaying full power which is not surprising since I was the one pulling a 70lb trailer. I was also grateful that my kids were happy in the back and not vocalizing any objections.

After a lunch stop at 38km, we got back on the bikes. Immediately, there was a hill and we were able to sneak past a bunch of riders in search of a gap where we could take up a bit of road to ride side by side. My battery reading was at half power and I really tried to utilize as little battery as possible while maintaining a 28-30km speed.

We passed a couple of guys and once again I could sense their confusion, so with full disclosure I said they were electric, and they responded very positively. “What a great way to go ‘green’ and spend time with the family” one fellow mentioned. I said, hop on to our draft and join us for a while. They took the suggestion and were laughing about how much of a slipstream was being generated.

Feeling we were getting a great workout, we decided to skip the next rest stop. It was easy to stay together as one unit, and I thought ‘families that play together stay together’.

Approaching 60km I noticed I had one power-bar of battery showing on my display. It would have been very easy to place another battery in the trailer, and not doing so turns out to have been a mistake because within 15km of the finish line, I lost total power.

I called Dai, the Gears Guy who was running support for the whole event, and he arranged for another battery to be brought out to the 75km point. Kate and I had to get creative and ride 5-10km without assistance on my bike. The combination of my 50lb bike and 70lb tow was slow going, and now riders were passing us like we were spectators – all that ego and bravado from earlier, now it was feeling like a bit of payback.

We decided that I would hold onto Kate and the power of her bike was able to pull us all through the hills at a respectable 20km average. We were still together laughing, and the kids were having fun. It was a bit of a challenge but we worked as a team to get through.

Again, I was still thinking “families that play together stay together” – the important thing was we were together, that’s how tight family bonds are created. At that point we had been out on the road for 3hrs. Within 5km to go I saw the Gears support car – Greg had another battery. Kate’s battery was now blinking on the last bar due to the extra load created by towing me. We switched my battery and set out to complete the ride.

Within 1km to go, Kate lost all power on her bike and we decided to put the bike in the Gears car, and Kate would ride alone with Greg to the finish line. It was a bit of bummer because the power went out just before the last climb to the finish. I powered up the hill, and was in position to showcase this amazing technology. My observation; one still has to pedal hard, but the reward from the assistance prevents you from going into the red zone.

Kate was there to meet us at the finish, and the lessons we learned about the technology overall created an amazing experience for our family, and we learned (perhaps the hard way) how to better plan for our next ride.

On behalf of the Wallace Family