When asked to work the outside eBike test ride area at the fall bike show, I replied with an enthusiastic yes knowing there would be interesting conversations ahead about eBikes.

Sure enough there were, and one of the most interesting ones was with a woman named Kelly. She owns an eBike along with a couple of other regular bikes, but she wanted to know what I thought the future of Electric Bikes might look like. That lead to a deeper conversation and a follow up meeting where she laid out her interest in testing an eBike-based initiative next summer!

In her outreach to learn about eBiking opportunities, Kelly came across the organizer of Crank the Shield, a 3-day stage race in the area of Sault Ste. Marie. Crank the Shield is an awesome event, and this year it is opening up a new category for eMtb’s. “eMTB” meaning electric-pedal-assist mountain bikes.

Kelly is nothing if not gung-ho, so upon learning of the event, she decided to enter the 2019 race in the eMtb category. Now came the hard part; gaining confidence that she could actually do it, and getting ready for the challenge. That’s when I got the call.

Although she has a mountain bike and enjoys riding trails, she felt the only way to do those kind of distances in that kind of terrain would be on an eMtb. To understand the feel of an eMtb, she wanted to ride one for a weekend and asked if we would rent one to her for that purpose. Since we just recently started renting eMtb’s, it was easy to say yes.

Kelly required an extra-small frame and the one we had in that size was the Liv Vall-e. We set it up and off she went to see how she felt about undertaking the race. Already mid-November, the weekend weather was still looking great, especially riding on a new eMountain Bike. 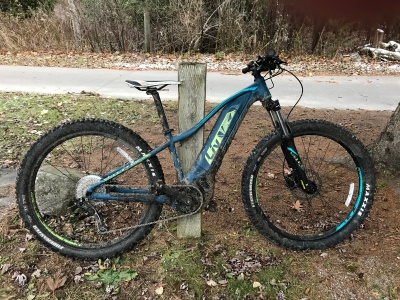 We caught up Friday for her report on the eBike, and how she felt about it regarding the potential for doing the race. Kelly started with declaring she loved the experience and was definitely getting her own.

On Saturday, she had gone to Albion Hills for 3 hours of riding both double and single track. Overall, she enjoyed it but the 28 kms she covered (mostly in eco mode) chewed through 40% of the battery life. Clearly, she would need to get a bike with a bigger battery to be able to cover the 75km first leg of CTS.

The next day, off she went to Hardwood Hills where she found a white winter wonderland to make riding a little trickier. An example of that was the spinouts that occurred climbing when she applied too much torque. Even with some snow challenges, Kelly still stayed out for 1 1/2 hours riding mostly in the Eco power setting, and during the entire ride, she saw no one else, only a deer that appeared about 20 feet away. Ahhh, to be out in nature!

After a few days to filter through her impressions, Kelly’s assessment is that she hopes to find a lighter eMtb, with a shorter wheelbase and at least a 650 Wh battery to complete the distances she will be riding.

Armed with all that information, the job now is to find the best eMtb for a determined woman who is going to ride her first Crank the Shield event.